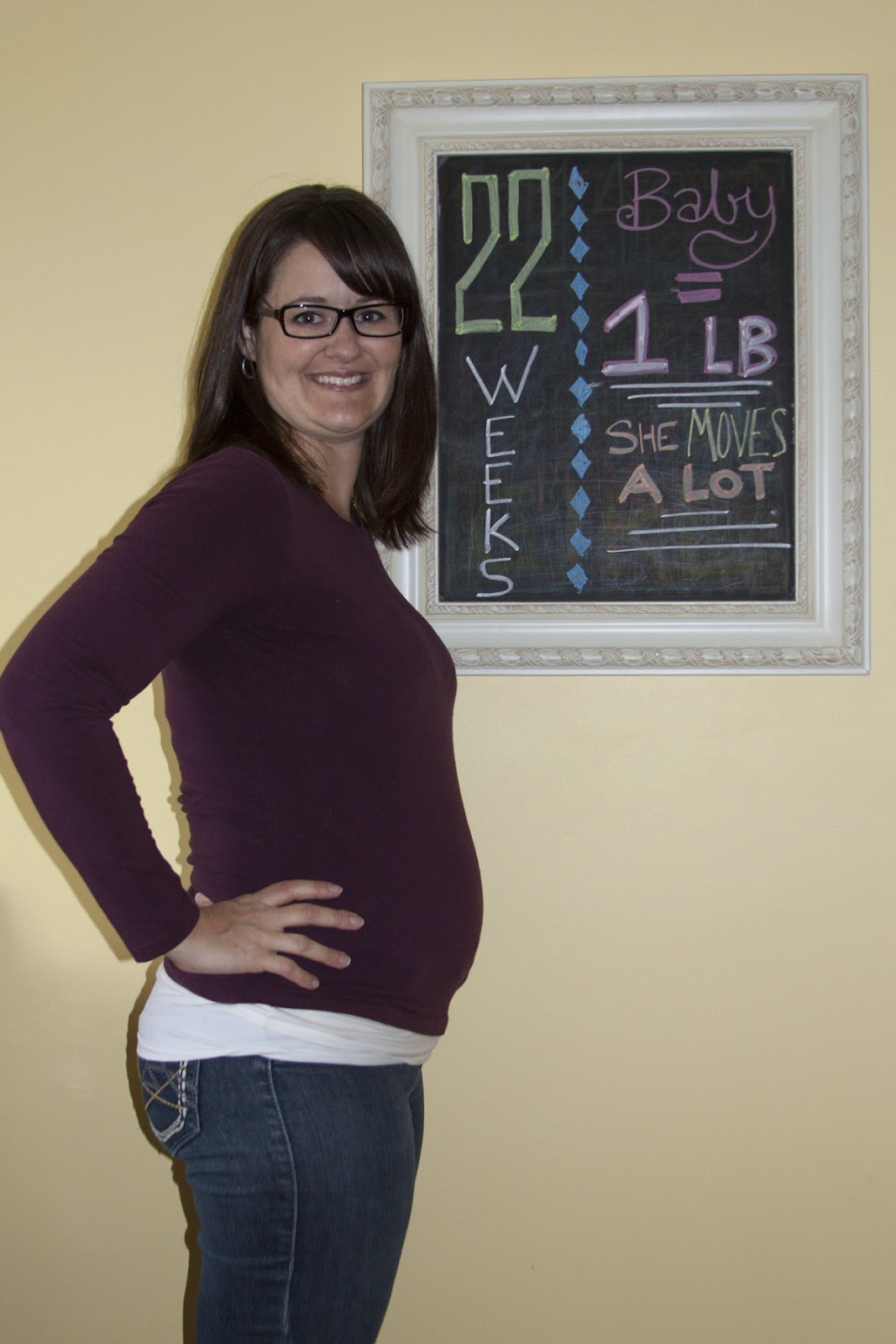 Since last week I was all ‘pity poor little pregnant me’, this week I’ll try to be a little more upbeat. You’re welcome.

Lots of changes happening with me this week! Obviously, you can see the belly is sticking out just a tad more! I have noticed that while it’s pouching out the front….it’s REALLY pouching out the sides. As in, my ample pear shape (pre-pregnancy) now looks like a elephant’s ass attached to Barbie’s upper body. It’s lovely.

Another yippee skippee change is that I think I’m starting to develop water retention in my legs. I’ve noticed when I take my socks off at night that there’s a nice puffy line where they stopped. Awesomesauce.

But you know what makes all this worthwhile??? Baby girl! And her moving around CONSTANTLY! Serious. Girl is like a circus acrobat in there. All.Damn.Day. This morning I woke up at 3am (yes the peeing 4 times a night thing has started back up and I’m super excited about it), and all she did was just push and kick and roll. It’s the most amazing feeling! I tried to see if I could feel it with my hand, but I think my placenta is still in front of her enough to block it. Damn it.  But then all day today she’s being doing backflips. First she’s over on the left side, elbowing her way through my insides. Next she’s somersaulted over to my right side with a healthy roundhouse kick. I’m starting to wonder if Ryan’s little swimmers are part Chuck Norris. I know this activity level doesn’t come from my side. We’re lazy asses. We like naps. We LIVE for naps. So this kung foo-ness is all Ryan’s fault. Anyone surprised at this??? Yup, me neither.

Ohhhhh, and let’s talk about the potty sitch. Holy Rocket Ship Toilet Seats people. I bet you I’m in the bathroom 18 times a day. That’s no exaggeration. I straight up peed at 3am, 4am, 5am, and 6am, then at 8am when I got to work today. I think that’s slightly excessive, don’t you?!?! And I still have like 3.5 months to go with this shit!!! Or I guess I should say ‘piss’. Clearly Baby Girl likes to camp out on mama’s bladder, and she sees fit to not budge. Super.

Last major addition to the ‘symptoms’ of pregnancy…….gas. Yup. Just call me Queen Flatulence. I’ve just given up trying to hide it now. I just let ‘em go. I kinda feel bad for my co-workers. Kinda.

So, I should probably give an update on the housing issue. It’s not good folks. We didn’t get our ‘dream home’. Because the sellers are a bunch of stuck up candy ass losers didn’t like our offer. So, we just let it go. We’re keeping a positive attitude that our ‘perfect’ home is still out there, and we’ll find it eventually. We are still closing on our house May 10th, and I’ve been busy packing, packing, packing. Unfortunately, Ryan’s been working super overtime, so it’s been a lot to deal with for me. But after this week, his schedule should slow down and he’ll be able to help more. Two weeks and we’ll be out of our home. TWO WEEKS!! I can’t believe it.

Luckily, we’ve found a rental that will do a short term lease. It’s a house, with a backyard, and they will allow the spoiled rotten 1st ‘child’. BTW, this is Wyatt’s idea of packing: 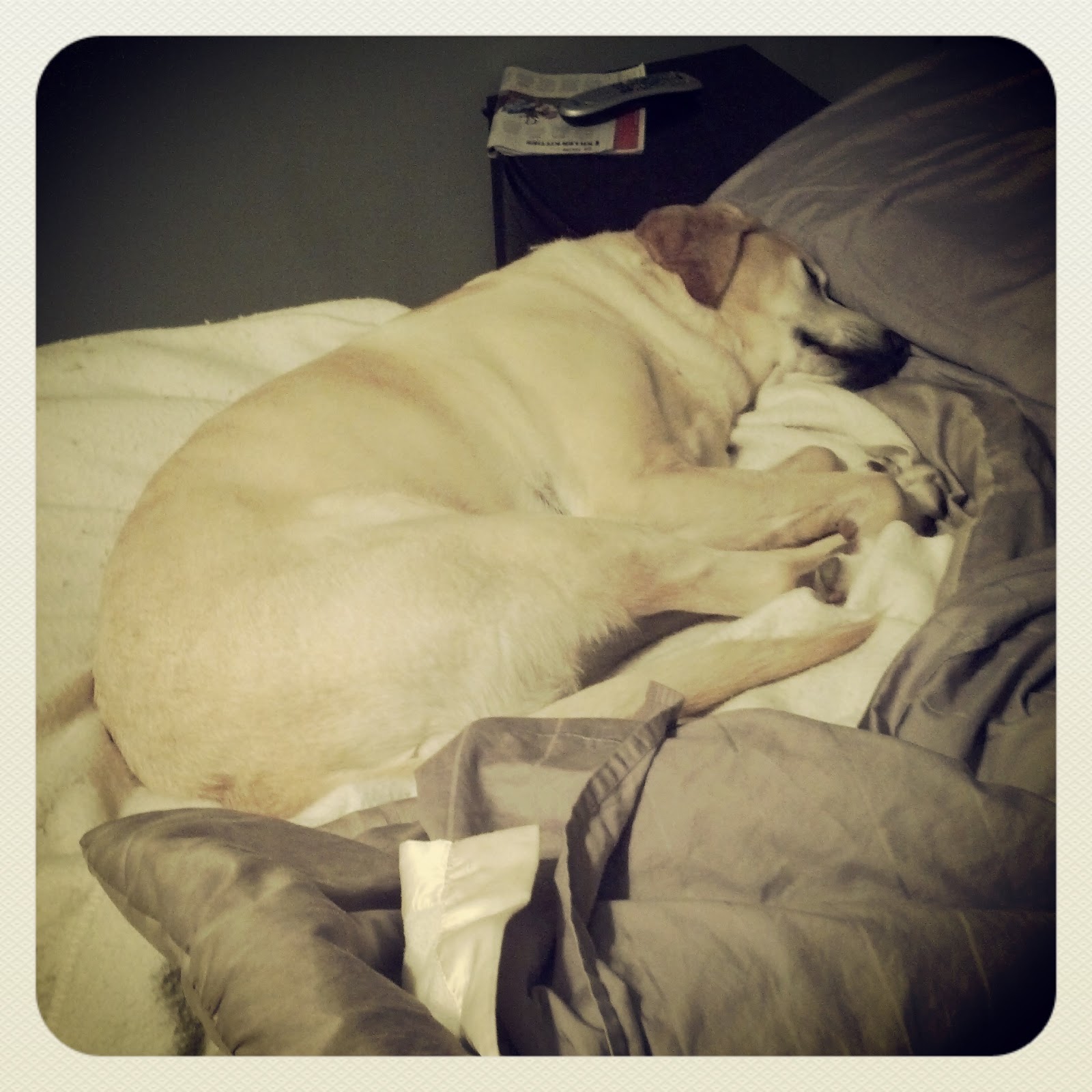 All in all, we’re playing the waiting game. There’s no real house out there that we’re interested in. So we’re just waiting for the right one to come on the market. I’ll let you know how everything goes!

Moving on to Baby Girl!!! Holy Cow! She’s already a pound in there! (I wonder how the other 19 lbs I’ve gained happened???? Just kidding, I know that’s the placenta…..right?) Besides all the moving and shaking she’s doing she’s also able to grab things now. Like the umbilical cord. Her sense of touch is getting stronger every day, so she’s probably dying to feel everything! Her sense of sight is also developing, she can perceive light and dark much better than before. Except, it’s always dark in there, unless I shine a flashlight on my belly, which I’m totally going to do later tonight. The eyes, eyelashes, and eyebrows have now fully formed, and even more hair on her little head! Although right now it has no pigment, so it’s stark white. How cool is that?! She’ll probably end up coming out with dark or black hair, seeing as both Ryan and I have dark hair. But you never know!

I’m just so excited for her to get here and for me to see her cute little face!!!

The sun is shining, I have ice cream, and I haven’t peed in 2 hours. It’s a good day folks. A very good day!
Posted by Laura Belle at 1:47 PM