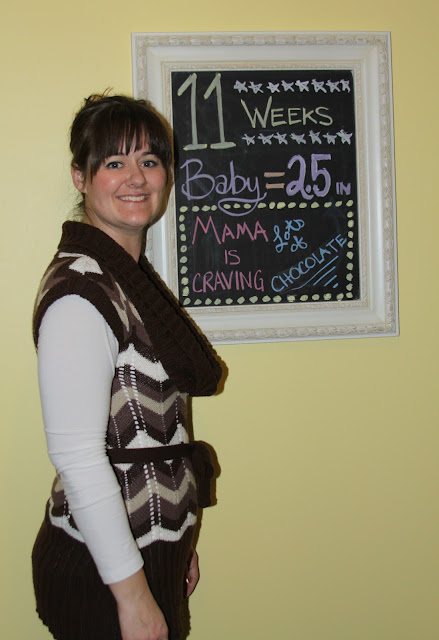 Good news!!!! The bump has showed up!!!!! It still looks like a beer belly to me, but you can definitely see a difference from last week. It’s just amazing how much one can change in a week!!

I did have another episode with the lovely morning sickness this week. On Monday the 28th I woke up in the early morning hours and just wanted to die. I have no idea what triggered it this time, but baby just wasn’t happy. I couldn’t even get down water until the middle of the afternoon, but by evening I ate a sandwich. And thank the good God it stayed down.

I didn’t get much exercise in this week. I blame Ryan. He was out of town all week due to work, so I didn’t have my work out buddy. However, I did get A LOT of rest. Like shitloads people. And it was glorious.

That being said, I’m still so exhausted.  With all that rest and relaxation, you’d think I’d be all Energizer Bunny. But I’m not. I’m more like Loafing Sloth. I’m still not sleeping at night. I wake up at random times and can’t get back to sleep. And oh my gawd!!! The dreams I’ve had! Some have been crazy real. Others are freaking scary ass nightmares. Then there’s some that just make no sense at all.

I’ve dreamed about work. And not getting stuff complete. That makes sense. But the one that doesn’t…..I dreamed I was working at my old college restaurant again, and it was a horribly busy night, and we were chugging Hurricane’s in the back (those are really strong ass drinks). None of that is weird. Except for the fact that I was 31 and still working as a waitress in a college town. Not that that’s bad, it’s just odd.  But the super weirdo part is the manager was a giant rabbit. Like with huge furry ears and everything. And he kept yelling at us to get food out when there was no food to get out.

Moving on to more gloriousness and less weirdness, I am gaining a lot of weight. I’m now up to 156-7 depending on the morning. In the back of my mind I’m all, ‘YOU NEED TO PUT DOWN THE CHOCOLATE FATTY!!!’ Then it’s like I have no control over my actions. I just continue to grab for the candy jar, or somehow make my way down to the vending machine, or an employee freaking brings me a huge rice krispy treat that I suck down like a hoover. But I’m beginning to see that all this processed sugar is NOT a good idea. Despite what the baby wants.

So I’m going to start keeping in mind what I shove in my mouth, add more veggies & protein, and try to not end up one big round chocolate bar by the end of this pregnancy. We’ll see how it goes.

Another glorious fact about being pregnant……acne. EVERYWHERE! I have more pimples than a 13 year old boy! It could be because of all the crap I eat, but I’ve also read it’s part of being pregnant. Awesome. I mean, I’ve been pretty blessed with fairly clear skin my whole life. And it’s not like I have huge whiteheads on 90% of my face, it’s just that I have more acne than I’ve ever had ever before! I have back-ne, and chest-ne, and I even found a pimple in my ear! MY EAR PEOPLE!!! WTH. That being said, it truly isn’t that bad. I mean, I know it could be way worse. It’s just one of those things that I’m not used to and now have to get used to it.

On to the baby!

Little Wik is more than 2 inches long already! And weighing about a 1/3 of an ounce. It’s head is about the same length as it’s body. And hair follicles are starting to form on that little noggin! Fingernail and toenail beds are developing and by next week the nails themselves will start growing! The torso is straightening out and lengthening. Baby can stretch and do somersaults, and forward rolls! Little acrobat in there! While it’s still too early to tell the sex, testes are developing if it’s a boy and ovaries if it’s a girl!!! Craziness!!

Tune in tomorrow for WEEK 12!!!! Which is what I’m currently at! So we’ll finally be caught up! Also, there has been some questions about names, and yes we’re already thinking about some. I’ll get into more of that tomorrow too!!!

Oh, and thanks for all the compliments on the chalkboard! I actually made it! I took pics, so I'll put up a tutorial next week! It was so easy!!
Posted by Laura Belle at 11:39 AM