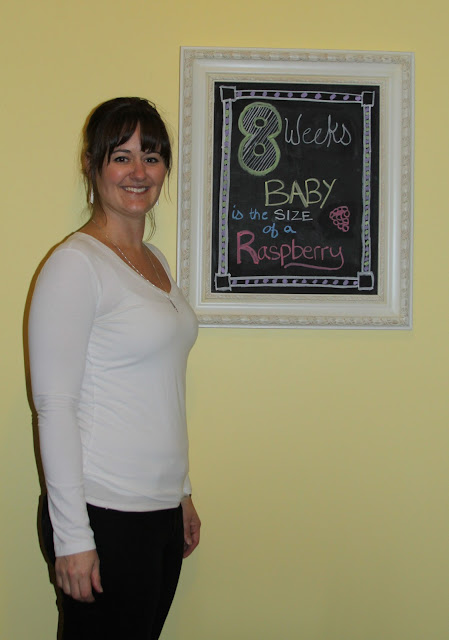 Ok. Truckin’ right along in the weeks.

This week was a lot of ups and downs. First down was that I had a huge craving for Taco Bell. Bad, bad, badbadbad idea. I ordered the same thing I always do and promptly mowed it down like the champ I am. I knew right away, it wasn’t going to be good. About an hour after my taco-fat-fest I knew I had to try and relinquish my hold on my lunch. At work. That was awesome. What made it even more awesome is the only thing I had to combat my lovely breath was mini altoids. The awesomeness continues.  You better believe I made a stop at the store to get a ‘work set’ of toothpaste, brush and mouthwash.

I’ve learned a few things with the morning sickness episodes though. First off, to help with the nausea I need to eat right away when I feel hungry, or better yet, snack all day long. If I wait too long before getting something in my tummy, I just end up feeling miserable. I also can’t stuff my face. Oh, there’s a 7 layer chocolate cake sitting there?!?! Ummmmm, just a small sliver and not my normal truckload please.  And while 7-up helps with the nausea, I’m not a fan of all the chemicals in soda, especially now. So I’ve traded it up for some sparkling water that’s all-natural and zero calories. They have a lemon-lime flavor that helps a lot.

I’ve been extremely lucky to only get physically ill twice this whole time. And boy, when it gets physical, you better count me out for the rest of the day. It’s horrendous. Like the worst feeling ever. I haven’t had a stomach virus since like kindergarten, or more accurately, I haven’t had a horrible hangover that involved ‘stomach issues’ since about college. So it’s been awhile since I’ve prayed to the porcelain God. Lordy it’s awful. I just get so drained I can’t do much more than lay on the bathroom floor till I get everything out. Then I crawl to bed and burrow under the covers for 10 hours.

So, that was a downer. You probably don’t want to hear about all that yucky stuff, huh? Well, tough shit. You already read it. Hehehe.

Onto the good news! We finally went to the doctor!!!! I’ve known my OBGYN for awhile and he knows all my struggles with trying to get pregnant. But Ryan hadn’t met him yet, so I brought him along to the first appointment.

Nothing really special happened. The doctor kind of went over what his ‘views’ were on inducing, genetic tests, which hospitals to have the baby at and what options are at each one. He went over any questions that we had. And he also determined that ‘something’s growing in there’. Well, that’s a good sign Doc. Otherwise we need to start figuring out why my tatas are the size of grapefruits and I’ve been randomly puking.

The Doc did decide to do a early ultrasound the following week to rule out the possibility of twins. Ummmm, WHAT?!?! TWINS?!?! Yes, lets RULE OUT that possibility STAT please. I guess Clomid can cause twins to happen. And Ryan’s grandmother was a twin. Which, I think it only matters if it’s on the woman’s side, but whatever. Two strikes against me, for the love of God, lets make sure there’s only one little person growing in there!

It’ll also be nice to ‘see’ the little one too!!! It’s so hard to get excited about something when you can’t see it, ya know?! So this will be fun!

As far as the baby’s going, it’s about ½ an inch right now. It’s looking more like a baby, and not a tadpole. Bonus! The upper lip is forming, and the cutest little button nose, and tiny little eyelids. The baby’s webbed fingers and toes are differentiating now!!!  The heart rate should be around 150 beats per min. Which is high, but that’s good for right now!

I can’t believe we’re already at 8 weeks!! This trimester is flying by!!!
Posted by Laura Belle at 9:13 AM