Dead Cat Sunbathing and 'Can you google -Replace Vinyl Siding-???'

So it started all normal-like with a dinner with friends on Friday night, at this fabulous small town restaurant called The Hoof & Horn. Seriously. Only in Kansas.

Actually, it really was fabulous. It was down home cookin', like chicken fried steak the size of my ass (which is.........large), fries dripping in grease, and a hot fudge brownie sundae to hit the bottom of your gut like a 2 ton brick type home cookin'.

Baby was in Heaven.

Ok. Lets be honest. Mama was in Heaven too.

We then headed to Kansas City on Saturday because Ryan had a Bachelor Party. Yes, we're 32 years old, have a baby on the way, and we're still going to Bachelor Party's. We'll, not 'we', more like 'Ryan'. Shit needs to stop I tell you. Luckily this is the 'last' friend that's single in our little group. Everyone else is married, has kids, or is planning on having kids. We're the fall-asleep-at-8pm-after-watching-HGTV type people. Not have-chugging-contests-while-at-a-BYOB-strip-club-bachelor-party type people. Wow. If that doesn't scream 'old tits' I don't know what does. Christ.

Anyways, so while Ryan was knee deep in g-strings, I was spending time with my long lost bestie, Mandy!! Mandy and I met in college.....which in itself is an interesting story.

So it was a normal Wed. night and a small group of friends were sitting outside getting shitfaced (because this is what you did in college, doesn't matter the day), and Mandy and another friend Marcia come over. They were mutual friends of a friend of mine, and we instantly became buddy-buddy. I mean, what says friendship like a firepit, endless booze, and a next day hangover???!!!

Well, the next day we were chatting on the phone and Mandy said she had to go back home for the weekend for her brothers homecoming celebration (he was overseas in the military). Then, this is the semi-weird, but to me totally normal part, she invites me to come up and stay with her and her family. Totally normal. I've known her for about 2.2 days and half of which I was wasted. It's fine.

Of course I said yes. I mean, drive 2 hours to spend 2 days with random strangers with unlimited alcohol??? What the hell else do I gotta do?!

Once I get up to her hometown, the night proceeds to be a normal small town celebration at the Legion, where you drink Natty Light out of a can and you can't see 2 feet in front of your face because of all the smoke.  2am rolls around pretty fast, and when you're young and dumb, your night is just beginning. So we grabbed the closest/cutest boys to us and demanded they drive us around in their beefy pick-up truck to 'country cruise'. We had no beer, so I think we had to steal it out of someone's parents house. And we set off for a night....errr morning.....of fun.

Things get a little fuzzy at this point (imagine that), but I do remember ending up in Herkimer, KS, which is about spitting distance from the Nebraska state line. We somehow ran out of beer in the wee early morning hours and decided to crash at one of the cutey's house till the next day (which would be Sunday).

Upon waking Sunday, we found the weather to be a balmy 60 degrees, and BONUS, we found 2 beers in the cooler!!! Nice and warm from the night before. Mandy and I promptly decided this deserved a little morning lawn/tanning/drinking session. So we pull out a blanket, threw the beers in the freezer to chill for a minute and proceeded to enjoy the sun in the middle of this small ass country town, at a house that we aren't totally for sure who owned.

This is the point when things started to go down hill.

We quickly drank our one beer each, and decided that we needed more. Possibly a lot more. So we picked up our bottles, and went to grab the blanket that we'd been laying on for about an hour.

That's when we saw fur.
A lot of fur.
All over the grass.
Right where we were laying.

Ohhhh no. It was a DEAD CAT!! A dead FLAT cat!! That obviously had been dead for awhile.

We'd been laying on a dead flat cat for an hour. *shivers*

We both jumped, screamed like the girls we are, and ran into the house in hysterics. The boys thought we were nuts. But they quickly calmed us with a trip to Nebraska for more beer. This all happened at 10am in the morning, mind you. I blame lack of sleep and alcohol consumption on our lack of visual awareness of dead animals in the tanning location.

Our road trip ended up lasting the entire day of Sunday, and part of Monday too. I think we were totally drunk for about 2.5 straight days.

But you know what comes after a 2.5 day bender, tanning on a dead cat, small towns, and 597 gallons of gas???? A friendship that has lasted forever. We are probably the only people on the planet to sun tan on a dead cat carcass.

Through the years we've had many completely wacked-out crazy shitscapades of similar experiences. All involving copious amounts of alcohol. (shocker)

Sadly Mandy moved to New York right after my wedding, almost 4 years ago, and I haven't been able to talk to her, or to see her, at all.

BUT!!! She recently moved back to KC, and I just HAD to see her!!
So, that's what I did last weekend while Ryan was babysitting 32 year old drunk bachelor monkeys.

And again, it was a shitscapade of epic proportion. Only difference this time.....we were stone sober. Both of us. Which was a first.

Mandy wanted to grill me dinner, but didn't know how to run the grill. Being the tom-boy that I am, it was no problem for me. I should point out that Mandy is RENTING this place from a friend of hers, so nothing in this house is really hers.....including the grill.

I'll just show you in pictures: 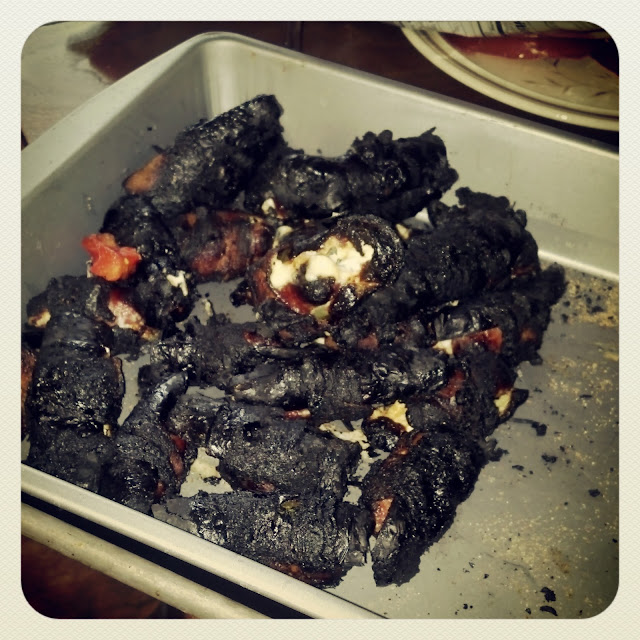 They were seriously on the grill for like 5 minutes. Completely the grill's fault.

Well, as I'm trying not to singe my eyebrows off while taking all these bad boys off the grill, I failed to notice one very important detail about the lid........ 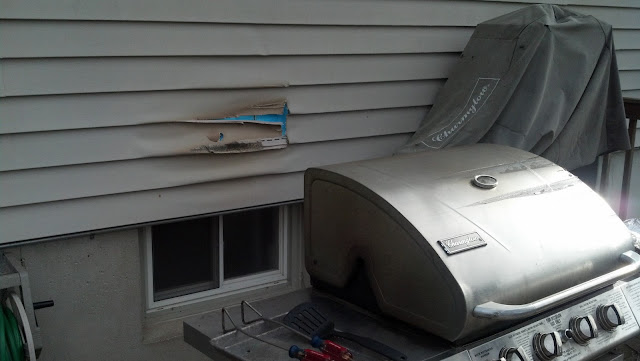 Mainly, that it was resting against the f*cking house!!!!

I have nothing to blame this on except for my epic stupidity!
Awesome.

Can you imagine if we were normal shitpants wasted?!?! There'd probably be no house. There'd be burnt toothpicks left.

Note to self: Do not grill if you do not own said grill or house. Ever. EverEverEver.

Shit like this only happens to Mandy and I.
Long live the Mandy Moo and La La Shitscapades!!!!

BTW, there is a completely educational vinyl replacement video on YouTube taught by an old balding Jersey dude who wear's a shirt that says, 'I'm Too Sexy For My Hair', that is well worth the 8 minutes to watch. Just google it.