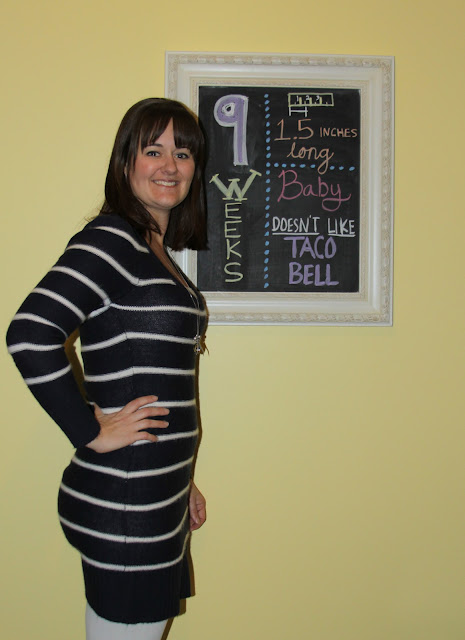 First off, it looks like I'm mixed up in my weeks and chalkboard things. Oh well. Second, do you see that ghetto-booty?!?! Holy shit Batman. Talk about Badonkadonk.
Moving on.

Another big week for us this week!!!

First, there’s not much changed with me.  I’ve gained a few more pounds and crave chocolate and ice cream like a fat kid at a health camp craves Little Debbie's. It’s a serious deal folks. All I want is sweets. All.Day.Long. And to make matters worse, the stores have put out the freaking V-Day candy already, so it’s aisles and aisles of pink and red, foiled wrapped, chocolaty deliciousness! What normal human being would be able to turn down a bag of goodies, let alone a pregnant chick that has serious urges for chocolate?!

Pretty much if I don’t get chocolate when I start to crave it, things get scary peeps. Real scary. Like you better back the f*ck up if you don’t have a Twix in your hand when you talk to me. You might get bitch slapped.

At first, I was all about butterfinger blasts from Sonic. Ice cream, butterfingers, whipped cream, yeahhhhhh. I think I had one every day for 3 days straight. Needless to say the scale reflected that stellar judgment.

I decided that I needed to try and control the urges, just a little. Otherwise I’d be all Violet Beauregard from Willy Wonka in a few months. That does NOT need to happen. So I went out and bought a few bags of small Dove dark chocolate hearts. I probably pop about 4-6 a day, but that’s still only 200 or so calories. Better than the 8,000 in the ice cream, huh? So far, happy mama. And happy baby.

But if someone slips me a Little Debbie cupcake or double fudge ice cream, I might rip their arm off trying to mow it down. Just saying.

This week we went for our first ultrasound, remember the ‘chance’ for TWINS!!?? Well, everyone can breathe easy because there’s just one little one baking in there!! Thank the mother lovin’ Baby Jesus.

Ryan went with me and the lady led us down to a dark room with a recliner type thing and a huge TV screen on the wall. We explained that it was still super early, but there was a chance for twins, so we were there to rule that out.

I cannot freaking express to y’all how amazing it was to see our baby just hangin’ out, beating it's little heart, on the TV. AMAZING!!! We could see the head, and the butt, and little stubs for feet and hands. The heart was beating so fast, and you could see it!!!! Pitter-patter-pitter-patter!!

The baby measured at about 1 inch long! About the size of a large gummy bear, and that’s what it looked like too! The heart rate was 165 beats per minute. Still a little fast, but that’s normal. You could say that it’s a little extra fast and that means we’re having a girl……..but I think it’s still too early to tell.

Ryan was in awe. So was I really. I got a little teary-eyed. I was just so worried up until this point that there was nothing in there, ya know? I mean, it happens. It’s terrible, but it does. But once I saw that little person, I was so relieved!

It suddenly became really real. Like super real. Like, holy shitballs, we’re going to be parents!!!! All that waiting, and trying, and drugs, and tests, and worries, and more drugs……it finally worked!!! WE’RE HAVING A BABY!!!

We got pictures!!! Which I think I’ve already put up here, but here they are again:

As far as what the book says, Baby Wiksten’s on track with being an inch long. So that’s good!! I know it’s still early, but I’m glad it’s not already showing signs of gigantorness. With Ryan’s height, and I’m not a shorty myself, I have visions of birthing some 2 foot long toddler. Lol!

The baby is actually a fetus now, and not just an embryo. The head is straightening out and is more fully developed. The liver, spleen, and gallbladder are forming. The baby is also making spontaneous movements of its arms and legs. I can’t feel it, but it’s doing a little happy dance in there!! Go baby go!

This week we also told my Mom and her boyfriend Hardy. OK, let me tell you how freaking hard it is to NOT tell your mother and best friend, whom you talk to about everything at least once a week, that you are pregnant. And keep that colossal secret for 7 weeks!!! Someone should have just shot me and put me out of my misery. (FYI, the reason we didn’t tell them sooner, was we were waiting to do it at our Christmas, and since we have about 24 different schedules to coordinate, we had to wait until Jan.)

First off, every time Mom called, I had to make a conscience effort to not talk about the pregnancy, or morning sickness, or cravings, or whatever. It was terrible! So most of our conversations for weeks were very one sided……her side.

And remember how I didn’t answer the phone that one time, and she flipped out, called my cousin on me, and thought I was dead and buried in some country ditch??? Well, imagine what weeks of one word answers will do to a worry-wart mother?? Not good folks, not good at all.

By the time we rolled around to this week, I could tell she was starting to get really worried. Her and Hardy both would call me and make sure I was ‘ok’. Ughhhhhh. I guess once a mother, always a mother huh? I sooo can’t wait for that part of the deal to start.

Anyways, we finally got to her house on the 18th, said our hellos, put our bags away, cuddled with all the pups, and I promptly whipped out their ‘present’. I did remember the video this time!

Sorry, the video is really dark. As you can see, it took a little bit to 'get' the picture. But they were excited! This will be the 3rd grandbaby for her and the 10th!!! grandbaby for Hardy.

After we told them, we moved right along into all the important parts of when I’m due, etc, blah, blah, blahbitybabyblah. But they were the ones that got to see the sonogram pictures first. Which was fun.

Weird part, we’re all sitting around her table and talking about the baby, and Mom blurts out, ‘OH MY GAWD, I craved chocolate so bad when I was pregnant with you!!! It was terrible!! I would kill for a Snickers! There was this one time when I was teaching, and this kid had a Snickers sitting on his desk, and I SERIOUSLY considered confiscating it for my pure enjoyment!!’

Hummmmm, coincidence much? Mom craved chocolate, I crave chocolate. Maybe there is a little girl in there!!! I guess we have to wait till April to find out for sure!!
Posted by Laura Belle at 9:56 AM