The weekend was awesome. Relaxing. Exactly what I needed.  I love the lake.

No crazy funny stories or anything. We were lame-o and did nothing but lay on the dock or deck, did a lot of reading, and threw in the fishing pole once.  I know. I should calm down on the physical exertion.
﻿
﻿ The holiday started off with me flying home like a bat outta hell (BTW, I hate it when people drive 45 in a 60...in the passing lane! Get the F over already, I've got to get the lake!) to get home. Once there, Ryan had already packed the cooler but without putting in half the things on the list that needed to be taken. Nice.  So I unpacked the cooler, then repacked the cooler with the 30 things we needed. (Men...can't live with them, can't let them pack the cooler.) Once that was settled, we loaded up the dog, who was going berserk the whole time Ryan and I were going from house to truck to load it up.  He's whining and drooling and jumping up and down like he's got tourettes. I think he thinks (in his little pea-brain) that we're just going to leave him in the house for the 3.5 days and make the trip without him.  Crazy animal.

Traffic on the way down was non-existent, which is never the case. We have to drive a 2 lane highway for 4.5 hours and it's usually packed with semi's, campers, people pulling boats with a Nissan Sentra, etc.  But none of that shenanigans this trip, we cruised all the way to the cabin, which was a nice change of pace.

Can I just say that Ryan's parents crack me up. They are the most sweet and good natured people but extremely energetic.  Sometimes it gets a little out of control, but in a 'they are moving around way too much and I feel like a lard ass for sitting here doing nothing' kinda way.  They cleaned and worked on the cabin, dock, boat lift, and garage all weekend.  Sometimes I get tired just watching them.  Cliff (FIL) asked Ryan to think about what tools to bring down on the 4th of July so they can work on other things that 'need' to get done (nothing really 'needs' to get done, unless they want to build a whole new cabin).  Ryan just looked at him and said something like, "I'm not bringing any tools down, this is a holiday. A chance to RELAX!" Bet you 10 bucks Cliff brings down a buttload of tools and works on little projects all weekend.

There was enough food to feed an army, Pam (MIL) brought dinner for both Sat and Sun nights (steaks and fajitas...YUMMY) and then brought all the lunch meat for sandwiches, all the sides, snacks, deserts and breakfast for one morning.  I've learned in the last 4 years that if I am going to contribute I have to just bring down what I want to bring down and then open my thing first.  For instance, since they were having fajitas I said I'd bring the salsa because I have a huge jar left over from last year (that I home-made and canned) and I wanted to use that because I know it'll be super healthy and have zero salt, but when I got down there, they had bought this huge container of store bought brand.  I nearly tackled them to get to my jar and get it open first so they wouldn't open theirs.  (Just kidding, no tackling happened, although that would have been really funny.)

I am proud to say that I ate EXTREMELY great all weekend.  I can not, however, say that my alcohol non-consumption was up to that level of greatness. I drank some beers. Alright, I drank quite a few beers.  And they were fabulous.  But my eating was great. I didn't exactly follow the 'one day pure protein and one day protein and veggies' plan that I should have with the Dukan Diet. It's really hard to get in just protein when you only have a select amount of food.  But I did eat healthy salads with non-fat dressing (even when we stopped at Burger King on the way down; that was a first....ordering a salad at a fast food burger joint, but I did it), lots of deli meat, cottage cheese, veggies and yogurt. I had two, count 'em 2, little lemon cupcakes that were 130 cal each and a half of a chocolate chip cookie.  That's pretty damn good for me, considering I usually roll out of bed and start shoving delicious deserts in my mouth till the sun goes down.

All in all, I did awesome on the food and I am so happy that I found that b*tch Willpower this weekend.  (She's a nasty little hooker that has always been able to evade me, but I finally caught her slimy ass and pummeled the shit out of her.)

I didn't lose any weight, but I didn't gain any either.  That's a plus in my book people.

One thing that didn't happen this weekend was skiing.  The lake was up like 20 feet, so there was floating trees and crap all over the lake. Not a good idea to strap on a ski and go galavanting over one of those.  It'd hurt. A lot.  But we did get the boat in and took two little cruises.  The water height was beyond crazy. Playground equipment under water, electrical poles that were half sitting under the water, tops of 25 foot trees barely peaking out of the water. It was nuts. We're all hoping that the lake level will go back down to semi-normal for the 4th, otherwise we're not going to get in a lot of skiing this year.

Anyways, that's it for me. I know....kinda boring, but I can't live the super exciting, totally hilarious, famous life all the time. 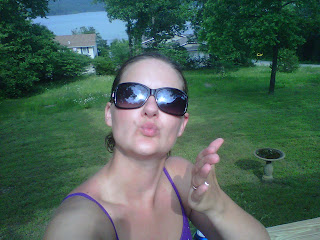