Weeds and a Walk

Last weekend I went to my Mom's house. I woke up Saturday morning and started to clean the kitchen and notice that there was something in the sink, defrosting.  I opened the bag and found this:

I turn to my mom and ask, "What's with the WEEDS?" She replies, "I know, there's tons of it in the freezer. I asked Hardy (mom's boyfriend): Is there something I need to know? Are we storing marijuana in the freezer now?"

I just about shit my pants.

And here's her reply, which by the way isn't that much better than having pot in the freezer: "oh, it's really milkweed, Hardy says it's amazing. It's like a delicacy."

Who in the Christ All Heaven eats milkweed?

Well, apparently Hardy does. Along with all Native Americans. They fight over it. Seriously.

I say this all the time, it should be a theme with me now, but....You can't make this shit up.

I was having a pity party earlier and a good friend of mine said this (after I complained about not exercising for like, ever): "take some walks solely for the purpose of being out in nature, relax, breathe."

So that's what I did. I came home, grabbed the leash and made Puppy's day by going out on a little jaunt. Here he is, half way through: 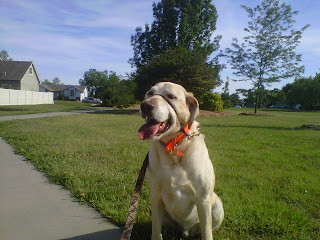 Note Blaze Orange collar and camo leash. Could we be more hick?
He thinks he's about to die because he's had 'strenuous' physical excursion for a total of 10 minutes and I'm abusing him because I forgot to bring his trusted water bottle to drink out of.