I have so many memories of my Grandpa Jim. It's hard to sift through them all to tell you a little about him. I could go on for days, that's for sure, but I'll try not to.When all my cousin's and I were kids (I have something like 15 or so cousins), we would go to the Country Club (because everyone in my family is obsessed with playing golf), and Grandpa would line us all up at the bar and buy us cherry Coke's and Shirley Temples.  And not the pre-made stuff. The bartender would make them 'special' with a cherry on top, in glass glasses, and we would sit there, slurping out of the teeniest straws.  Then we'd run back down to the pool and play Marco Polo for hours on end while Grandpa and the parents played a few rounds.

Another good one is visiting him at the bank (where he worked). The bank in my grandparents home town is a typical small-town bank.  It's kinda small, located in an old stone building, and the customers and/or employees didn't mind 10 kids running in and out all day looking for candy.  Grandpa's office was in the back and he was always on his trusty typewriter. Always.  He even used the typewriter for post-it notes. It was so cute.  He'd always stop what he was doing and take us to the kitchen and feed us super sugary cokes and whatever other sugary snack he could find.  Then send us sprinting down the alley back to our parents, literally bouncing off the walls. 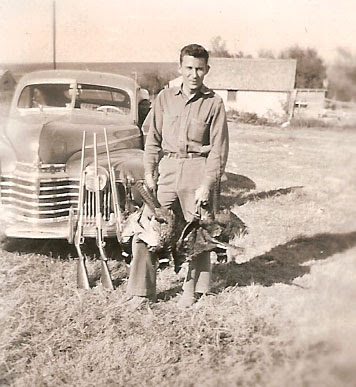 Grandpa always had a smile on his face. A big ol' smile that made it so easy to smile back.

My mom talks about what it was like to grow up with him as a father and it's, really, quite different than what I remember him being like as a grandfather.  Which, I suppose, is normal. Grandparents are always treating their grandchildren differently than what they treated their children. Grandpa Jim and Grandma Margie had 6 kids.  SIX! Five girls and one boy....poor Uncle Bill. Mom would tell me that Grandpa worked his butt off for most of their youth. Always working, hardly ever home, or coming home late.  Clients coming to the home, so he was working even though he was at home.  All to provide a good life for his kids. Hugs came from Grandma, and 'I love you's' were rare, but they never felt that that was anything but normal. Grandma stayed home and ran the house and the kids. Took them all to the pool, or clothes shopping, or grocery shopping. Could you imagine....6 kids and trying to buy bananas and milk with them hanging all over you?!?!

I remember Grandpa was always around when we visited.  Always giving us a big hug or telling us he loved us.  He was always just so happy and proud to have the family he did.  (But he would never take full credit for such a spectacular family, he always said it was because of Grandma.)
Our family is one unique bunch of nutcases.  Mostly, if not wholey, because of Grandpa and Grandma. They instilled excellent values and good morals into all of us throughout our entire lives. But they also loved to have a good get-together. And would make any excuse to do so.  Most of the time it was at football tailgates or the annual family Christmas party.  Sometimes there was a 4th of July celebration or half of us would just be up to their house at random times and the beer (or Crown Royal) would flowwwww.  It didn't matter.  Lord, Grandpa loved a good party.  I remember bringing Ryan up to a family Christmas for the first time and I was so nervous for him to meet ALL my family.  We're loud, we talk all at the same time (but have a crazy way of listening to everything at the same time too), we shift gears on subjects like a Nascar driver shifts gears on a race track and we have a really good time, which sometimes frightens 'normal' people.  Everything went smoothly, of course. Ryan fit right in; I don't know what I was so worried about.  I know Grandpa really liked Ryan a lot, from the first moment he met him.  He was always asking where he was (if he wasn't at a family function) and how he was doing.  And I think that with Ryan not having any living Grandfathers that he always thought of Grandpa as 'his' too.

I don't know if it was all the get-togethers, or the way we were raised, or just....because, that we are all so close.  I definitely think most of it has to do with Grandpa and Grandma.  There are a lot of my cousins I consider more brothers and sisters than 'cousins'. And a lot of my aunts and uncles that could be my 'parents'. I don't know if I know of another family that is as close as ours. I mean, I'm sure they're out there, but I just feel that ours is 'special'. Very special.

Grandpa was big on education. He sent all his kids to college. Most of them going to Kansas State University. I'm not sure if the 'obsession' started with his first child going there, or he was an avid fan before that.  But I'll tell you, he was the biggest, baddest, longest KSU fan out there.  He went to every football game, and darn near every basketball game. He's had season tickets for football for, I think, 50 years. Or close to it. He was KSU Fan Of The Year in 2007. He got to go down to the football field and get introduced on the jumbo-tron during the game.  I think that was one proud moment for him.
Going to the football games was another huge memory for me. Because we always tailgated before the game at Grandpa Jim's spot.  Really, it was my Uncle Bill, Aunt Terry, and cousin Kelly that put the tailgate on, and they also brought Grandpa to the games. Every time I walked up, he had his cup of beer in his hand and was walking around shaking the other hand with everyone that walked by the tailgate.  He was always ready for a big hug from his Granddaughter.  We would chat about my college life and what I was doing, and he would talk about golfing and what he was doing at home.  Then about 6 other cousins would walk up and the exact same 'scene' would repeat for each of them.

I met so many people at those tailgates that had known my Grandpa for years. You could just see the admiration and respect on their face when they talked to him. That's the way it was with him; if you showed him respect, he showed you respect right back.  And it was hard not to admire him.  He was so smart, and funny, and just plain likable. He was friends with everyone.
This is the third major loss for my family, on that side.  And the first of my grandparents to go, on that side too.  We don't particularly deal with death very well; probably because we are so close and to lose one of us is like ripping our heart out. But I will tell you that Grandpa requested a party.  He wanted us to celebrate his life.  And by God, that's what we will do!

*Note: I want to write an extra piece to send out a HUGE thank you to my Aunts Jeannie and Linda.  They have taken extremely good care of my grandparents for a number of years and without them I am positive Grandpa would not have made it as long as he did.  They had a very rough time with it and I just want them to know that the entire family, and especially myself, is so grateful for all they have done.
Posted by Laura Belle at 8:48 PM