First let me just tell y'all that Jordan is one cool chick. I just love her long tiieeeeeme! When we started the weekend, I'm pretty sure neither one of us figured we'd have the blast that we did.  And it was her damn good idea to do the blog off! I think that added the little extra bit of crazy to the whole weekend that we obviously all needed. Because we're not crazy enough w/o whipping out our cameras every two seconds to take pictures of God knows what. So, after you get done reading my version of the weekend, you toodle right over to Jordan's BLOG and check out her version! I've been saying I'm gonna kick her post's ass, but now I'm thinking she's going to kick mine! Tell us who you think told the better story!!!!

We decided to ride up together to Manhattan for the Big Wildcat Game, which turned out to be awesome. Non-stop chitty chatter the whole way up. We talked about houses, decorating, our husbands (who decided to spend the weekend hunting which gave us this little getaway weekend sans boys. Thank you Lord.), crazy families, holiday shenanigans, and everything under the sun! Girly Time: It. Was. Bliss.

Once we got to the holy grail of college towns, we had a little dinner, and made our way to our friends John & Lori's house and let the good times roll!

I'm gonna tell ya, nothing, and I mean NUSSING, beats walking in and seeing this little cuddle furbear: 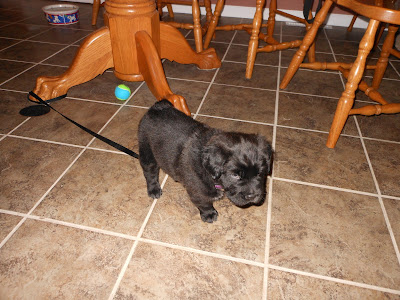 Meet Porter. He is a new addition to J & L's household. He is a Lab, Shar Pei (that's the mom) and 'possibly' a Saint Bernard (dad) mix. Pretty much going to be a powerhouse. But an utterly adorable powerhouse!

Oh, and Porter didn't start out a Porter. He started out a Stella.  Apparently some people have a difficult time determining the ding-ding from the hoo-ha (more on that in a little bit). John, do you need to go back to grade school and go through sex ed again??? Poor little guy doesn't know what to think!

We hung out and drank some brewskies outside, then mosied at the appropriate time of 1am. Jeesh. The weekend had one stellar start.

Waking up Saturday to get the tailgate started was......a little rough. To say the least. And remember how I was saying that we'd get out there around 10:30am, because clearly four hours is plenty of time to amp up for the game......well, it's not.  Nope. Just not enough time. We decided that 9:30am is a much better time to start the drunkfest. Oh. My. God.  It's ok, we just pretend we're 22 again and forget we're old tits and can't hang like we used to. Until we wake up Sunday and want to shove our melons in a vat of ice water to numb the pain. It's fine.

The morning started off chilly willy too.Stupid weatherman that said it was going to be sunny and 65 degrees. Fail.

We set up camp and commenced the drinkage of beer. This was the tailgate:
After we got all set up, we dived head first into the cooler. Ok, maybe just I dived. I'm pretty sure everyone else got beers out like normal folk.
And in honor of being hunting widows, we decided to celebrate with these:
Then the food came out! I made 2 dozen chocolate chip cookies. Full fat. It's fine. We're tailgating. It's like free calories. Right??
But some other culinary genius made this amazing dip/salsa/badass concoction. Oh my DeeeeLish. I didn't get the recipe. Shit.
And of course we had to do a little grill action: 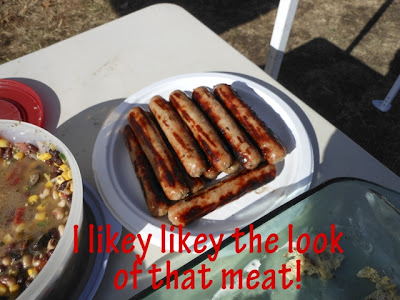 And, apparently Jordan did too, as she bellied right up to the brat bar. 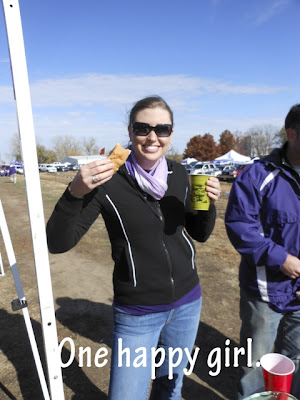 At this point the beer is flowing and we're all starting to feel a twinge warmer.  And we're getting a little more open with strangers....and strange sayings.

First, it was my freaking phenomenal idea to grab this perfectly normal person and make her pose with psychopants me because of the little word written across her ta-tas. In honor of all my BOOBs, this is for you:
John and Lori's 17 year old niece shows up at this point. She is quite possibly the sweetest little thang ever! 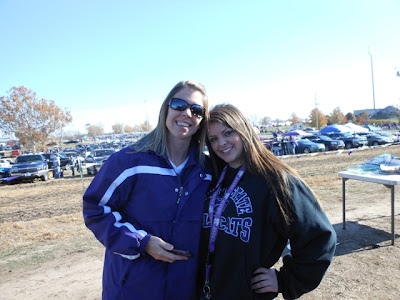 But, she does have one flaw.  It was not only John and Lori that had a hard time distinguishing the gender of their cute little Porter, but Andrea had a major hand in it as well.  See, Porter's mom is Andrea's parent's dog.  So she was there when J & L went to pick out their 'Stella'.  Well, as she so quaintly put it, "I am not a ding-ding professional."  Strange saying #1. I guess you could say that's a good thing on one hand, but a bad thing for little Porter's thing.

Here we are a little while later.
I'm thinking the beers are starting to go down very smooth at this point.

We made our way to our seats, just in time to see the band finish up: 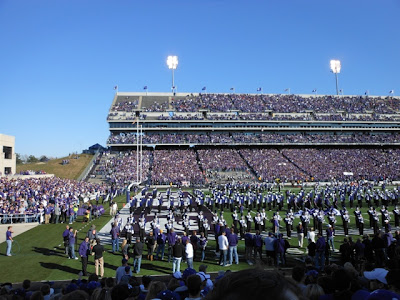 And then the CATS start to take the field!!!! 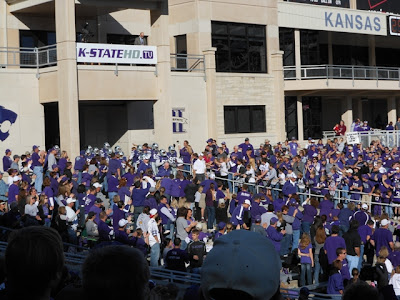 First half went by way too fast. So fast I forgot to take any pictures. But never fear! Half time is here!
And we tried to channel our inner beer cup to gain warmth.
At some point during our little intermission, I was quoted as saying "Well, my left boob is $5." Strange saying #2. Don't know why, don't know what it was about, pretty much I just don't know. Strange things spew out of your mouth on a game day.

We got back into the game to finish up the last half. And ohhhhhh, what a half it was. 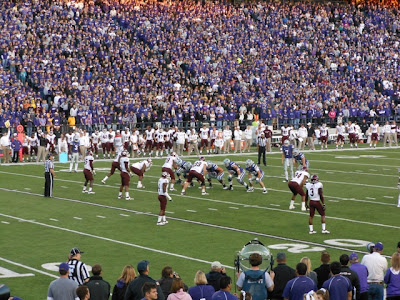 We came out playing like we meant it! Kickin' ass and takin' names. But freaking A&M kept coming. We ended the game tied, going into overtime. And then overtime again. And again. And again.

I believe this was the score after the 3rd overtime. Yes, THIRD! There were 4 in total. 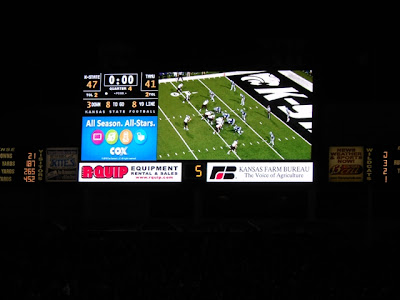 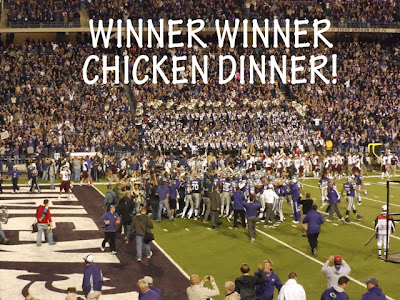 My throat was sooo raw from screaming that I could hardly drink a beer. But I muscled through, of course.  I bet I screamed for 2 hours. For. Realz. Like sucked up all the air around me and proceeded to scream every last puff of it out before I sucked up air again and screamed bloody murder. It was brutal. Straight up brutal. But we won! And now we're at 8-2! I'm so proud of my WildKitties!!!

Oh, Jordan and I also figured out that 1-2 hours of lung exhaustion is like burning 834 calories. There's an app for that. Well, not yet, but we're coming up with one. Which completely justified the 30 pack that we nearly polished off during this weekend extravaganza. We were so tired but yet so amped up with adrenaline I felt like a jack rabbit on crack.

Wanna know what it's like to come down from such an amped up high?? Murder. Pure murder. We somehow found our way home and after almost mowing down 2 large pizza's, we were done. D.O.N.E. All around Done-dee.
So we made our way to the couches. John and Lori wouldn't let me snuggle with them. I had to sit WAAAYYYYY on the side of the room. Not nice. I so could have fit in between them and Porter.. 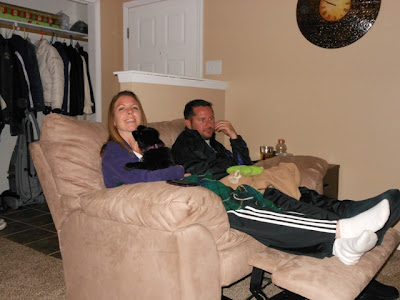 All and all it was a freaking fantastic weekend! Good fun. Great friends. Glorious memories! 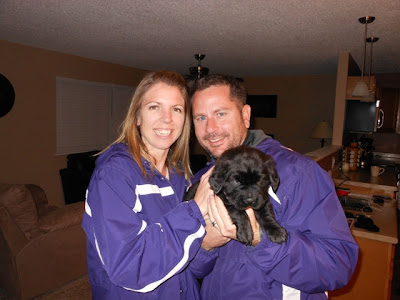 Thanks John and Lori for letting Jordan and I invade your humble abode! (And almost sneaking Porter out of your house to Wichita!)

Now! Go over HERE! Read Jordan's post-toasty! You won't regret it!
And don't forget to comment on who you think should win the blog off!!!!