I know, I know, it's been a whole two weeks since the last Ten Things. How did you ever survive?
Well, we're back in action this week!!

2.  If you didn't see my Thanksgiving Day recap, you suck.  Just kidding, go check it out. Because what happens on Thanksgiving........will definitely be shown on my blog for all the world to see. Vegas rules do not apply here.

Roll up with cheese. 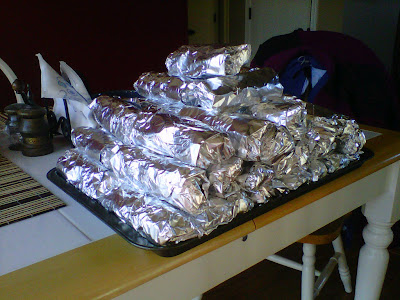 If I live for 125 years, I never want to make them again.
Well, until next year, when my loving husband asks me.
Shiny things Ryan, expensive shiny things are needed.

4. Oooooo, UPDATE on the Liar Sitch: Some of you remember my little post about liars and how I feel tar and feathering is an acceptable form of punishment for those who lie. But if not, check it out HERE. Anyways. The latest is that the certain asswipe liar has not spoken to me, unless absolutely necessary, for like a week and a half. IT. HAS. BEEN. BLISS. Come to find out.....the certain asswipe got a little 'talking to' from someone else and was instructed to leave me alone.  I love it. Simply love it.

5.  I haven't been tracking my food. At. All. I suck big Polar Bear Balls. It's fine. I just have been super busy at work and at home. No, that's a lie. I'm lazy. Pure and simple. Lazypants McGee, that's me. And last week for Thanksgiving, I pretty much ate just about whatever I wanted. Homemade biscuits and gravy.......Sure! Butterscotch Pumpkin coffee cake dreamliciousness......Load it up! Chili cheese nachos.......Bring it on! Ughhhhh......
6.  So you know how we went to Big Cedar Lodge for our 2nd Anniversary. And it was all great, and fantastic, and freaking amazing. Well, we did have one little hiccup....our guided fishing tour we took for 4 hours on Sat. morning blew. The dudes name was Jim VanHook. Seriously. Well, he sucked. Ryan did not catch a single fish and the few fish I caught wouldn't have kept an ant full for 2 hours.  Anyways, they had these comment cards so I filled one out and just went to town on how disappointed we were. And you know how bitchy convincing I can be. Well, Big Cedar called me the other day!! They're giving us another 4 hour guided fishing tour for free the next time we go there!! Woop Woop! That's a nice little excuse to go back, huh?

7.  Wanna know what I figured out the other day? Well, I'm going to tell you. I figured out that on my crackberry when you text and you hit the SYM button for the symbols, like the '&' sign, you can just hit the corresponding letter that is under said symbol, in this instance it would be the 'L'.  So hit SYM button then L. Instead of scrolling all over the place with the little scroll key to select the symbol. I've only had the phone for 2 years. Jesus, Mary, and Pete.

8.
9.  I'm going to another KSU football game this weekend. It's the last one for the year, well, except for the kick ass bowl game we'd play at. I'd be super excited, except it's supposed to be a high of 34 with a chance of snow and the game starts at 11:30, so we'll be tailgating at the asscrack of dawn. Shitballs. Frozen Shitballs. Better whip out the puke green long johns and 1985 ear muffs.  But I came up with the most superb idea: Bring a vat of coffee and a bottle of Bailey's! And then I thought, why stop there, I'm going to get another thermos of hot water and a box of instant hot cocoa and buy a bottle of Peppermint Snapps. I am the Liquor Goddess. It's ok to be jealous.

10. I went shopping. Again. But it's justified. I don't know if I told y'all, but I need a new coat.  The only ones I have are ski jackets, and when you're wearing tall leather riding boots and a nice pink sweater dress, a purple Columbian just throws the whole mess off and I end up looking like a high end homeless person with no style whatsoever. Enter the search for the perfect P coat. And as fate would have it, both JCPenny's and Kohl's sent me coupons in the mail. Boom. First stop was Penny's. Nothing. I mean, I found a very nice Worthington, but for 75 bones.....pass. I'm more in the market for $40. Next stop was Old Navy. Same deal. And I even stopped in Maurices. Nada.  BTW, you know you haven't been to the mall in eternity when the 3 stores you go into are all completely remodeled. Nice.

So, I ended up heading to Kohls when I saw a Gordman's and decided to stop. I opened the doors and it was like AhhhhAAAAHHHHH!! Check out my little purchases: