I give Thanks for Shithouse Wine, Shotguns, and Excavators.

Nothing says Thanksgiving like walking into your mom's house the night before, and literally the first words out of her mouth are, "Laura, you gotta try this wine! It's cool beans!" Seriously, Mother, I haven't even put my bags down yet, but OK. And 'cool beans' went out with scrunchies in the 90s, mmkay? But for some reason, it sounds completely normal coming out of your cute mouth.

Back to the wine.....I try. I like. What is it, I ask. Just a simple little question. But gets the most epic response. Mom, "Well, I can never remember the name so I just walk in the liquor store and ask: 'Do you have that wine that's in a blue bottle, I can't remember the name, but its something like Shithouse?'" 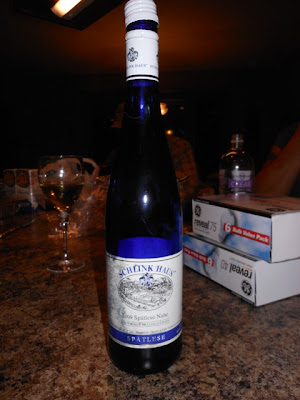 Schlink Haus....Shithouse. Close enough in Jules World (Jules would be Julie, my one in a million mother, well except for her 4 sisters who act just like her).

Jules also broke the cleaning tradition this year. So sad. See, every year, Ryan and I show up Wed. night prepared to wake up at the turkeyasscrack of dawn to clean every inch of her huge house (because I love to clean my own house, why not clean someone else's too, just makes sense) and get ready for Thanksgiving.  This year.....nope. Didn't have to. It was like I was on vacation. Amazingness Do Nothing Vacation. Hardy (mom's bf) and Mom took off early and got damn near everything done before we got there. Yippeeeeeee, time to start the drunkfest earlier!

However on Thanksgiving morning, I did need to make my carmel apple cheesecake dip again. Since it was a raving hit at the work snack party.  And I had a little help form my new sous chef:
And while I'm simply slaving away in the kitchen.....the boys are doing super duper important things: 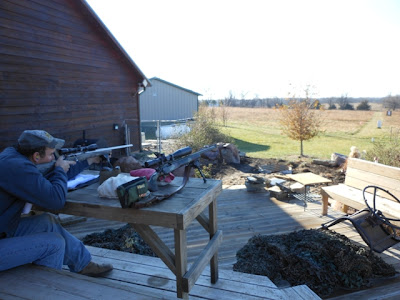 Sighting in their rifles. Off the deck. Literally two steps off the dining room.
On to the feast. We're all going to starve. 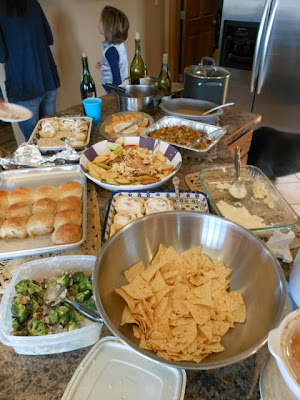 And that's only one table. There was another one, plus the counter space. Glutony I tell ya.

The carving of the birds. 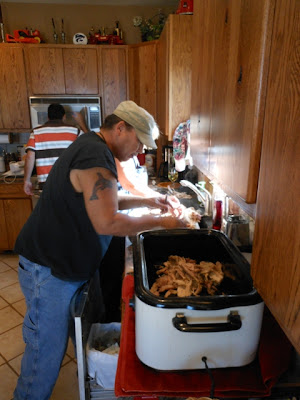 And my brother in the background trying to figure out the microwave. The buttons are on the right Michael, no....your other right!
And leave it to my family to come up with this ingenious invention:
And Turkey Day was not complete until you line up 27 tables from dining room thru living room and into the entry way. That way everyone can sit together.
Next up.....shotgun time baby. That's right. What would Thanksgiving be if not to shoot some fluorescent clay circle thingys out of the clear blue sky, just for pure amusement.

And I got to use my new gun. Look out, bad ass approaching.... 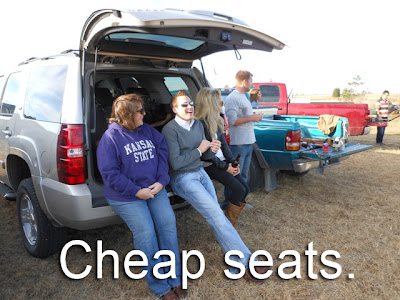 Loading the thrower thingy.
Venturing out to get all the unbroken clays. We couldn't shoot worth shit.
But we sure did try our best.
And what do you do when you have loads of empty beer cans just laying around..... 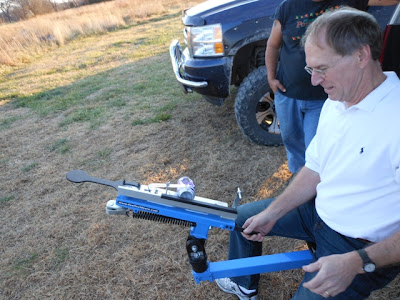 Put them in a thrower and see how far they go. Why not.

And while we're on the subject of Hickville highlights, lets whip out the go cart. 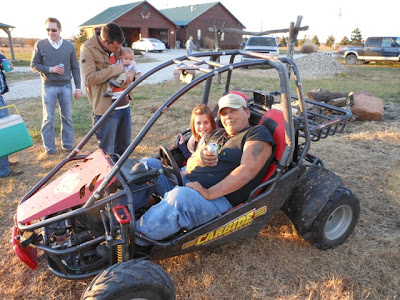 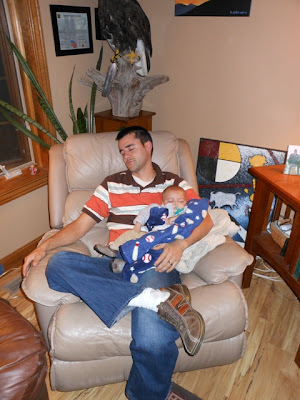 And using the baby as an excuse to nap......nope, doesn't count.

But look at this little squishy cheeks a few hours later: 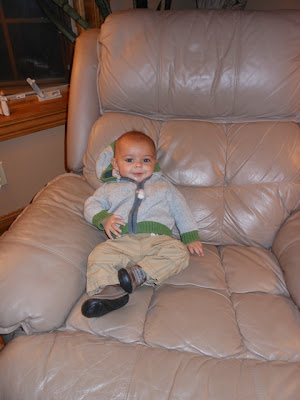 Dontcha just want to squeeze him?!?! Looks just like my brother. And acts like him too.
Lawd help us.

Later that night, when we're about 3 sheets to the wind, I decide that a trip to the casino is soooo in order. I mean, it's only about a mile from my Mom's house, why not? But who's going to drive......ummmm. That's when Mom pipes up and says, "Well, we've driven the 4-wheeler to the casino before." Nice, mother, nice.

We didn't end up making that glorious trip, but next time.....oh next time.

The following day we did a little hiking, a little napping, and Mom and Hardy did a little firewood cutting. Apparently my mother thinks that letting the fire dwindle to ash and throwing on logs and starting a new fire is for whimps. Lets just keep the fire burning for eternity. The devil would be comfortable, for sure.  Because of this completely sane logic, she needs to LOAD UP on firewood every fall.  And when I say LOAD UP, I mean LOOOOOAD UP. 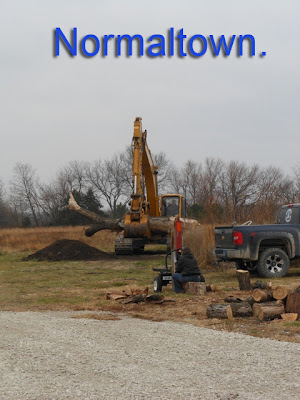 Well, when you have an excavator just sitting around, twiddling it's thumbs, why not put it to good use to tear out a 75 year old tree and carry it to the log splitter.  Clearly, there's just no other way. 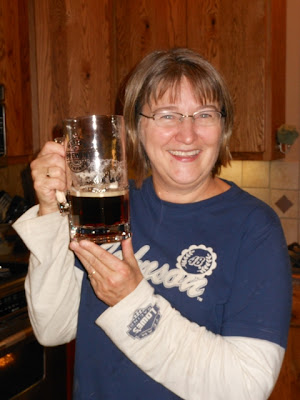 If you note my profile pic, you'll get the drift.
Yes, mom, you are now just as coolpants as moi. Your welcome.

Nothing beats my family's Turkey Day. Absolutely nothing.
Posted by Laura Belle at 9:18 PM